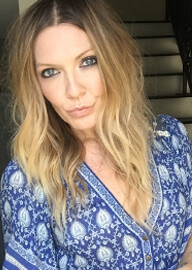 Alexis Swain grew up in Malibu, CA.  Interested in art and dancing from a young age, she put herself through college at UCLA as a World Arts and Cultures Major, but was swayed post-grad into pursuing a slightly different pallet... the art of faces.  After attending Make-Up Designory in 2003, Lexi has spent the last nine years perfecting her craft.

Based in Los Angeles, she has had the opportunity of working in all genres from TV and music videos to ads and editorial,  Over the years she has been privileged to collaborate with many incredible photographers, directors, and celebrities, including Bar Rafaeli, Audrina Patridge and Ringo Starr.  Her work has been featured in numerous publications including Black Book, ELLE, and British MORE! Magazine.

Lexi’s creative eye and attention to detail, coupled with her understanding of highlight and shadow allow her to virtually transform the face, truly evolving makeup into an artform.