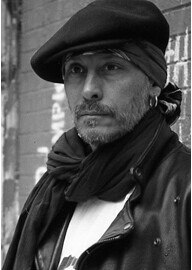 No stranger to the creative arts, Damian Monzillo was nurtured by an actress mother and a musician father, exposing him to theater and music that included the influence of the New York stage and Rock n’ Roll. Think Fosse meets Hendrix.

Taking those roots to the School of Visual Arts in the Big Apple and after school, the legendary music clubs of the Lower East side. Envision edgy mohawks in the surreal world of Magritte.

Like many others the cry of “Go West, Young Man,” took root in Damian’s soul and landed him in San Francisco, just in time for the dot.com boom when technology and creativity fused with the energy of a Nevada test site. Hairdressing started here & evolved into a Love affair that continues today in the world of international magazines such as Italian Vogue. After spending more than 15 years “On the Road” between San Francisco & Los Angeles he came back full circle to his home in New York City. For the past few years he’s taken his Art school & life’s education to expand his talents into Graphic Design, Photography & Tattoos and Eyeliner a clothing/accessories line as well.